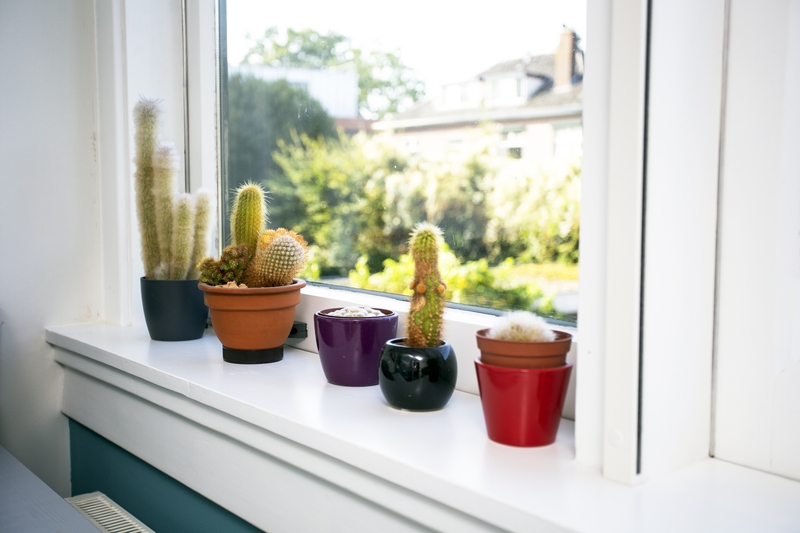 Cacti make great indoor houseplants because they are very low-maintenance. In general, indoor cacti and other types of succulents like aloe vera are known for their easy care. Often, if you forget to water them, they’ll be okay.

Over the course of this blog post, we’ll teach you what you need to know to grow your first cactus indoors.

Before we get into how to care for your cactus, it’s important to note that there are several different types of cacti. What you need to do to let your cactus thrive will depend largely on the species you’re dealing with. With that said, several popular types of cacti can make wonderful houseplants.

This cactus is so named because its followers tend to bloom around the Christmas season. It’s part of the family Schlumbergera, sometimes referred to as holiday cacti because their bloom times correspond with Easter, Thanksgiving or Christmas depending on the species. If properly cared for, the flowering of these cactuses can last for anywhere between 7 and 8 weeks. The Christmas cactus and its Thanksgiving cousin flower in a variety of colors from red to purple to white.

You can get several different types of holiday cactus from Amazon.

If you’ve seen a huge cactus with a tumbleweed rolling by in an old western, it’s almost certain the shot was of a Saguaro cactus. At first blush, you might think this has no place indoors. After all, they can grow as much as 45 feet high. However, they can have a lifespan of up to 200 years, and they’re very slow growers. Because of this, they can make good houseplants for many years. The National Park Service even has a resource on how to grow one in your classroom.

You can find several saguaro options, from seeds to plants that have been growing for a couple of years.

The prickly pear cactus is known for its edible fruit and variety of bloom colors across various species. Because they are so adaptable, the plant comes in a variety of shapes and sizes and it can be hard to identify individual species.

Sounding like something that belongs on a sushi menu rather than in a family of desert cacti, the sea urchin cactus is indeed not a cactus at all, but instead a Euphorbia from southern Africa. It grows in tropical regions of the mountains in its native habitat. The baseball-size plant can expand and contract depending on the amount of rainfall in the area.  The sea urchin has a white, milky sap which some people are allergic to, so it’s something to be aware of.

A plant that looks very much like the sea urchin is the star cactus of South Texas. However, this one is about the size of a softball and has very large and beautiful flowers, which the sea urchin doesn’t, producing only small white flowers.

The scientific name for the sea urchin is echinopsis, with many options available on Amazon.

A ball cactus is actually any one of a family numbering between 60 – 70 cacti species. Although a true cactus, it’s similar in shape to the Euphorbia. These species of cacti flowers from the crown and the flowers may be red, white or yellow.

You can get several different types of ball cactus on Amazon.

Like other succulents, cacti are known for having relatively easy care. Frankly, many of them are in a class of plants that are hard to kill. Still, it can help to understand the growing season for your plants and the best way to make sure that they thrive well into the future along with your other indoor plants.

You can get cacti potting mix. This may also be labeled as a mix for succulents. If you don’t have that on hand, a standard soil mix with added sand-like materials such as perlite or pumice to help with drainage can be useful. A well-draining mix will help you avoid excess water. We’ll get into this a bit more below, but with some notable exceptions, cacti don’t need much water.

If you’ve just repotted, you want to keep the soil very lightly moist in general to encourage the proper development of roots along with new growth. Speaking of potting, let’s get to it.

Depending on the type of cacti you have, it’ll be easiest to get started from an offset of a parent plant if you don’t already have one. Carefully cut one off the parent plant leaving some stem. Put this on a paper towel to dry for a few days and a callous should form. When this happens, put it in a new pot with potting soil until the roots form. Once this happens, you can put the plant in its regular container. You should generally repot when the plant begins to fill its container. With that said, there are some exceptions, depending on what you’re trying to encourage.

Holiday cactus species tend to be more root bound when they flower best. This means that if you want to see the flowers in their full glory, you need to let things get a little crowded. The holiday cactus should be repotted about once every three years.

In any case, it’s a good idea to make sure your pot has drainage holes because you don’t want too much water and you want to make sure anything not absorbed has a pathway out.

How Much Water Does Your Cactus Need?

In general, your cactus doesn’t need very much water. You can water every week or two. The key here is that you want to make sure the soil is completely dry to a depth of an inch or two before watering again. When it’s time to water, water thoroughly, but don’t let the plant sit in standing water. A well-draining soil will help prevent overwatering. It’s important to watch out for this because too much water can rot the root systems.

The exception to the rule of thumb about letting your soil dry out before watering is the holiday cacti family. Because it’s native to the rain forest, you want to keep the soil wet enough that it never fully dries out without overwatering for best results.

Your cactus will need more water during active growth seasons in the spring and summer. In the fall and winter, you can cut back and water it even once a month, but follow the plant provider’s directions.

How Much Sunlight Does Your Cactus Need?

If you want the quick and dirty version (after all, you have to get your hands dirty to plant most things), succulents in general like lots of bright light. However, let’s give these plants the individual attention they deserve.

For the best possible flowering opportunity for a holiday cactus, you should keep temperatures at about 65°F during the day and get 10 hours of bright or medium sunlight in the windowsill. Then keep it in the dark for 14 hours. You can use a cardboard box or other opaque container. Doing this during October and November will give you optimal conditions for achieving flowering.

You won’t see a saguaro flower for about 40 years, but the cactus is best with as much light as you can give it. If you’re using a grow light, generally get the most powerful light you can. 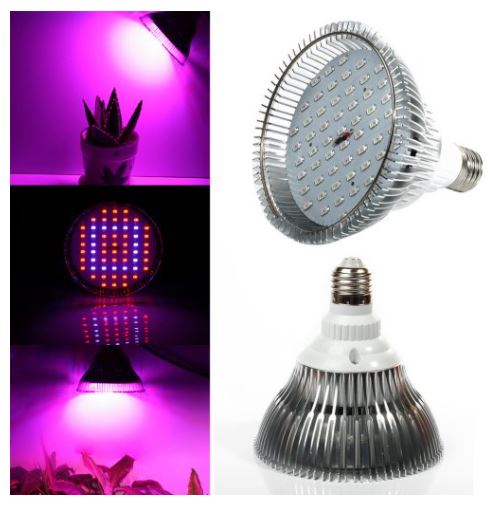 For the prickly care cactus, you want to put it in a South or Western-pointed window so it can get direct sunlight during its growing season in the spring through fall. For the winter, bright, indirect light will do during the rest period. Slowly reintroduce direct light in the spring so as not to burn the cactus.

For the Euphorbia obesa or sea urchin plant, partial shade will be a home run for this plant which grows in forested areas in nature. Fun fact, it’s nicknamed the “baseball plant.” I don’t care if plant parents aren’t supposed to play favorites; I just found mine.

For a ball cactus, it’s best to keep it in partial shade. Direct sunlight during the hottest hours isn’t good for it. Keeping it in indirect sunlight will prevent you from having to fuss with moving it around.

How To Feed Your Cactus

A liquid fertilizer formulated for cacti will work best with a couple of caveats. In general, the real question is how often to feed your cactus plant.

For an indoor saguaro, fertilize every 2 to 3 months during the growing season with a low nitrogen fertilizer (like a 5-10-10 formulation).

If you have a holiday cactus, follow the plant provider’s instructions, but a half strength dissolvable fertilizer is recommended. A 20-20-20 formula will work. Because holiday cacti prefer more magnesium, you should alternate this feeding with Epsom salts at a ratio of 1 teaspoon for every gallon of water. Just don’t do these in the same week as the regular feeding.

For the prickly pear, moisten the soil before feeding and use a balanced fertilizer at half strength. In general, we recommend liquid fertilizer because it’s easiest to use in an indoor setting. For the baseball plant, you can fertilize with a 10/10/10 mixture during the growing season at about a quarter of the strength.

For a ball cactus, use cacti mix during the growing season for best results.

Caring For Your Cactus Plants In The Winter Months

In the winter, your cactus will go into a period of dormancy. It won’t need to be fed. It’ll also require less water than normal. Cut back on watering. Just don’t forget about it altogether.

Pests That Can Affect Your Cactus

Pests don’t generally affect cacti, but some of the more common ones are spider mites and mealybugs. Mealybugs take hold in the roots of plants and literally begin to suck the life out of them. Symptoms include black mold and stickiness. Spider mite symptoms include brown dots and webbing. Like mealybugs, spider mites are parasitic insect.

If you can catch the problem early enough, the easiest thing to do is blast the plant with a strong stream of water to literally flush the bugs out. Just be sure to cover the potting mix with something in order to prevent overwatering.

With very little need for water and a slow growth cycle generally, cacti can be fairly easy to grow even indoors. They may have a reputation as a desert plant, but they can produce some beautiful flowers. In addition, cacti like the prickly pear even produce edible fruits.

What’s your favorite cactus? Do you see any that I missed that we should cover? Let us know in the comments below!

Kevin Graham is a gardening enthusiast. Construction of a trellis might be ambitious, but he wants to figure out how to grow a watermelon in his home. When not thinking about bringing plants to life through soil and fertilizer, Kevin is interested in other life-giving forces. Specifically, the Force. What’s your Midi-chlorian count?

link to 29 Incredible Philodendron Rio Care Tips You Should Know

Philodendron Rio is a unique and easy-to-care-for plant that will add some pop to any indoor garden. This houseplant has a distinct appearance and vibe that indoor gardeners love. We'll go through...

Philodendron Brandtianum is a tropical and easy-to-care-for plant that will add some pop to any indoor garden. This houseplant has a distinct appearance and feel that indoor gardeners love. We'll...