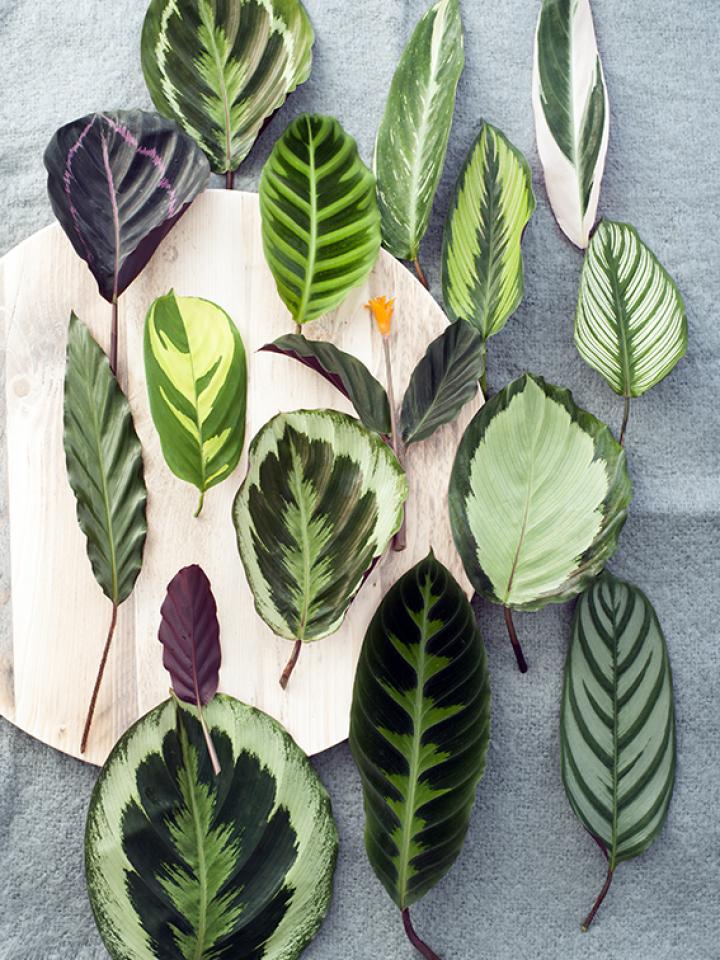 Calathea is a genus of tropical houseplants that belong to the Marantaceae family.

We should note that many plants that were commonly known as calatheas have been reclassified recently and are now part of the Goeppertia genus.

However, these houseplants still have common names using the word “Calathea” and are categorized as such in nurseries and on plant websites.

For the purposes of the article, we’ll include plants from both the Calathea and Goeppertia genus, both of which are part of the Marantaceae family.

Calatheas are also often called prayer plants, nicknamed for their leaves which move up and down throughout the day.

While calatheas have a bit of a reputation amongst plant collectors as difficult plants, they can actually be easy to grow at home as long as you provide them the right care.

We’ll start with a few care tips for these popular houseplants, and then we’ll get into all the different calathea types you can grow at home!

There are so many different kinds of calatheas to choose from, so we’ve picked both the most striking and most common cultivars of calathea for this post!

Calatheas are tropical plants so they do prefer high humidity. It is best to use humidity-raising tactics such as using a humidifier, grouping them with other plants, or using pebble trays.

They also like moist, but not soaked, soil. Calatheas can dry out quickly, so do keep an eye on the soil moisture level.

As always, use well draining soil (and a pot with drainage) to ensure your calatheas don’t get root rot.

Calatheas prefer warm and humid environments that mirror their tropical origins in South American countries like Brazil and Bolivia.

It’s best to keep them away from cold drafts as well as from things that suck out the humidity from rooms, like air conditioners or heating units.

Although they do prefer medium indirect light, calatheas actually do relatively well in low-light environments. As with any plant in a low light environment, however, growth will be slower.

Finally, calatheas can be notoriously fussy when it comes to the kind of water they like.

Use distilled water for best results, or allow tap water to sit out overnight to allow any minerals to settle to the bottom before watering.

This will decrease browning of leaf tips and other telltale signs of an unhappy calathea!

Calathea Varieties You Can Grow at Home

The Calathea White Star is a beautiful and easy-to-grow indoor plant that thrives in most home environments.

It has beautiful pinstripe patterns on its leaves. The pinstripe coloration will typically either be white or a blush pink color, or a combination of the two.

Meanwhile, the undersides of the leaves are a beautiful and elegant dark purple, which means that no matter where the leaves are moving throughout their daily “prayers”, the White Star looks gorgeous!

While many calatheas will stay relatively short in height, the Calathea Majestica White Star can grow up to 5 feet tall over time.

The Calathea Orbifolia is one of the most elegant varieties of calathea you can keep in your home!

This plant has lush, rounded leaves that are a beautiful oval shape and can grow quite large over time.

The leaves have subtle variations in color with pinstripe-type markings in various shades of dark and light green.

As the plant grows, you can expect it to reach a maximum height of around 3 feet tall with leaves up to 10″ or possibly even 12″ inches apiece.

The Pinstripe Calathea, also known as the Calathea Ornata, is one of the most common calathea plants.

At first glance it may look a little similar to the Calathea White Star, but its pinstripes are more uniform in color: typically a subtle, light pink color which is striking against the dark green leaves.

The Pinstripe Calathea also stays smaller than the White Star and grows to a maximum size of about two feet tall.

The Calathea White Fusion (officially called the Calathea lietzei) is one of the most spectacular types of calathea you can grow in your home.

The Calathea White Fusion has mostly green leaves with irregular marbling of white (and sometimes a blush pink or pale lavender tone).

Be careful with the light that this calathea receives! The light coloring of its leaves means that it is even more prone to browning and sun damage than other calatheas.

It also has a similar version, the Calathea Yellow Fusion, which looks very similar but has more yellow tones vs. white tones. The look of this is more similar to plants with “aurea” type variegation.

The lovely Calathea Musaica (also known as Calathea Network) is one of the most unique calatheas on this list!

This calathea has dark green leaves with an intricate pattern of teeny-tiny lines that are more lime-green in color.

The pattern of these markings are particularly unique even within the calathea family and as a result, it is one of the rarer and more sought-after calathea types.

The Calathea warscewiczii is another calathea you can grow in your home under the right conditions. Its nickname is Calathea Jungle Velvet — which is a lot easier to say than its official name!

This calathea has more velvety leaves than other calatheas. This means it has higher humidity requirements.

This particular calathea is an ideal candidate for being in an indoor greenhouse, bathroom, or placed next to a humidifier.

The Calathea Makoyana is also known as the Peacock Plant for its foliage which slightly resembles that of a peacock’s tail!

Its leaves are dark green with light green stripes, and underneath, the leaves are a light burgundy color but maintaining similar markings as you’ll see on top.

This is a bit unusual within the calathea family where the undersides of leaves tend to be rather uniform or matte in color.

It makes it especially beautiful when this plant is “praying” in different positions!

The Calathea Medallion is yet another prayer plant that does well grown at home.

Its leaves are rounder (with a slightly pointed tip), hence the name Medallion, since the leaves are shaped quite similar to a coin.

The undersides of the Calathea Medallion are a dark burgundy and can have almost a fuschia tone in places where there is less chlorophyll in the leaf (such as in the mint green sections).

The Rattlesnake Plant is one of the most striking members of the Calathea family! It is named so for having elongated leaves that look almost snake-like.

Its leaves are lime green with dark green spots that resemble the markings of a rattlesnake.

Like other calatheas, the undersides of the leaves are a deep purple or burgundy color, making for a nice contrast as the plant moves throughout the day.

The rattlesnake plant is a generally low-maintenance calathea although be careful — its thin leaves can dry out rather quickly!

The beautiful Calathea Crocata is rather unique in the Calathea family!

While most calatheas are known for their striking leaves and the patterns on them, the Eternal Flame is known for its flowers.

Many calatheas do not flower often, if at all, but the Calathea Crocata will typically flower several times throughout the year.

When it flowers, expect beautiful brilliant orange flowers that look like little flames emerging from its dark green leaves!

The flowers typically last two or three months before falling off and waiting to bloom again.

They bloom most often in the summer, but given good lighting conditions, they may bloom out of peak growing season!

My latest fave is my calathea rufibarba, which has super velvety leaves! #HouseplantHour pic.twitter.com/3nWZHyGIqs

This calathea is also nicknamed the “Furry Feather Calathea”, which is a rather cute and appropriate name for this plant!

Its leaves are elongated, similar to the Calathea Lancifolia (Rattlesnake Plant), though it has less striking coloration.

The leaves of this calathea are more subtle and have a slight rippled texture to the leaf, as opposed to the dark markings that the rattlesnake calathea has.

Of course, it also has the signature burgundy underside that you’ll find on virtually every calathea!

The leaves are not particularly velvety, but the texture of the leaves creates a soft look to the leaf, hence the “feather” designation in the nickname.

These plants can also dry out fairly easily so do keep an eye on your watering schedule!

This Calathea is also known as the Zebra Plant, although there are several other plants with this name, including the Aphelandra squarrosa.

The leaves of this calathea tend to have a lime green base with dark markings similar to zebra stripes on the tops of the leaves. As typical of calathea leaves, underneath you will find purple undersides.

The combination of the bright green foliage of the tops of the leaves with the dark purple undersides as the plant’s leaves move throughout the day make it a very beautiful sight!

The Calathea Roseopicta is also known as the rose-painted calathea and it is one of the most spectacular calatheas on this list!

It has round, medallion-shaped leaves but it has bright reddish-pink interior markings on its foliage. These can be large patches of pink or more subtle pink markings.

Plants within this species can look fairly different from one another due to the many variations there are.

Allison is a recovering brown thumb turned helicopter plant mom from California. She is obsessed with tropical plants, especially variegated rare aroids, and is desperately trying to turn her small Bay Area apartment into a jungle.

One thought on “Beautiful Calathea Types You Can Grow At Home”