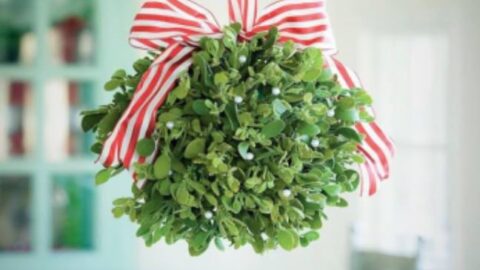 You’ve often heard the phrase “to kiss under the mistletoe” going around during the winter holidays, but have you ever wondered where this particular phrase comes from, or what it’s all about? Perhaps you’ve also wondered why the mistletoe plant is often characterized as the “Christmas mistletoe”, a magical plant used for festive decorations once the season sets in.

Well, I’m glad to tell you that this is your last stop. In this article, we’ll be examining the mistletoe plant thoroughly: including an introduction to the plant, its history, the different types of mistletoe plants we have, as well as a guide on how you propagate and care for a mistletoe plant at home. Let’s get right into it!

The Mistletoe Plant–A Brief Introduction to its Nature, History, and Nomenclature

Despite its association with kissing and festivities, the mistletoe is casually defined as a parasitic plant; which means it grows by living off of another plant. Favorite host trees of the mistletoe are apple trees, lime trees, poplars, hawthorns, and conifers.

There is more than one type of mistletoe (in terms of facts, there are over 1,300 different species of mistletoe). They are perennial parasitic plants that live off both woody trees and shrubs and have specialized rootlike structures capable of penetrating their hosts to obtain their nutrients.

The mistletoes used for holiday decorations are those that fall under the partial parasite classification. This is because they contain chlorophyll and can photosynthesize some of their own food, as opposed to fully parasitic mistletoes which do not have chlorophyll.

Although mistletoes can only remain healthy and reproductive by living off a healthy tree, they only pose a threat to the host when there are multiple mistletoe infections on that host. Singular or few infections will not cause much harm to the host, but multiple new infections can stress the host and lead to its death through diseases or infestation of insects.

Viscum album is the scientific name of mistletoe. Its common name “mistletoe,” is derived from the Anglo-Saxon words “mistel” (which means dung) and “tan” (which means twig). This is attributed to ancient beliefs that mistletoes were propagated from bird droppings because they appear on the branches of trees or twigs where birds have defecated.

This was disproven in the 16th Century after botanists learned that the plant was spread by the seeds in the gut of birds after consumption of the mistletoe’s white berry fruit. Seed dispersal of mistletoes mostly follows this pattern, while some others (dwarf mistletoes) have sticky seeds that are propelled outward when their fruits explode.

Many species of birds, squirrels, butterflies (and their caterpillars) and honey bees nest and feed directly on mistletoes. Some examples are:

Here, we’ll get into more of the botanical classifications of mistletoes and their natural habitats. The mistletoe is an evergreen plant, with brittle stems and swollen, articulated nodes. They have small, inconspicuous male and female flowers, and simple and opposite evergreen leaves, with the leaves reduced to scales in some species.

There are 60-70 mistletoe species in the warm parts of Europe. The oak mistletoe (also known as the European mistletoe) has over 200 species. It has characteristic yellow flowers and white, sticky berries. This species majorly parasitizes deciduous trees in the region.

The most important species in the United States are in the genus Phoradendron, translated from Greek to mean “thief” and “tree” referencing the plant’s parasitic habit. This genus has about 10-12 species found in the U.S., including the type used for Christmas tree decorations during winter holidays.

This species is called the Phoradendron serotinum, and it is a native plant of the eastern part of the U.S. It also infects deciduous trees, particularly the American elm (Ulmus americana) popularly known as the American mistletoe in urban areas. It produces small white flowers and white berries and all parts of the plant (especially the white berries) are toxic when ingested.

The dwarf mistletoes (Arceuthobium spp.) are found in the western parts of North America and constitute the most significant pathogen of conifers in the area. They are particularly harmful to trees as they reduce the tree’s growth rate, form witches’ brooms on their hosts, and predispose them to attacks by bark beetles.

A final honorable mention, which also happens to be one of the most unusual mistletoes known today is the quintral mistletoe (Tristerix aphylla), a leafless Chilean species. During winter, the red, tubular-shaped flowers appear through the cactus stems’ skin. It produces fleshy fruits which are eaten by Chilean fruit-eating birds (mockingbirds) that also disperse the seeds.

Myths and Traditions related to the Mistletoe Plant

Mystical powers have been attributed to the mistletoe plant since ancient times, particularly because of their parasitic behavior, elusive dispersal methods, and strange growing habit. Let’s explore some of them.

For a ceremony, Celtic Druids would cut mistletoe plants from oak trees with a golden sickle on the sixth night of the moon. They would then gather these cuttings during winter solstices and mid-summer because of the mystical powers they attribute to them. This is also synonymous with the sprig of mistletoe used for spellcasting by Druids.

Another particular use of mistletoe in the Middle Ages was as an aphrodisiac capable of warding away evil spirits and was hung in doorways of homes and stables to prevent the entrance of witches. This was particularly prominent in Europe.

Mistletoe is also believed to have the ability to give life and confer fertility, as well as protect against poisons. This traditional belief dates back to Greek festivals in Saturnalia and Scandinavia, where the plant was used during marriage rites.

In Norse mythology, Balder, the Norse god of peace, was once killed by an arrow made of mistletoe. Balder’s parents, Odin and Frigga, were able to restore his life by giving a mistletoe to the goddess of love. It was therefore decreed that anyone who passed under the mistletoe should receive a kiss. This became one of the origins of the phrase “kiss under the mistletoe”.

The phrase has a darker origin, however, as is told in another legend of Norse origin. Odin received a blurred vision of the death of one of his beloved sons, Baldur, in a dream. Out of fear for his son’s life, Odin and the rest of the gods made all sorts of physical objects unable to harm Baldur, but the small and unnoticeable mistletoe was overlooked.

The gods believed that Baldur was safe and celebrated by throwing objects at Baldur, laughing as the objects bounced off him. During this celebration, Loki, the god of mischief, crept to Hodr, the blind god, with a dart he had made out of mistletoe, and taunted Hodr to throw it at Baldur.

These Norse legends and traditions relating to European mistletoe were eventually attributed to the American varieties of mistletoe as Europeans migrated and settled in the country.

Mistletoe, despite its parasitic nature, can also act as a beautiful plant for your outside garden (or home garden, if you have a small tree). It’s important, however, that you control the proliferation of the plant, otherwise it could spread from your host tree to branches of other trees and ultimately kill the plants.

To propagate, it’s important to note that you will need a host plant for the mistletoe seeds to germinate on. If you’re growing your mistletoe plant indoors, you should use a potted small tree as your host plant. Be sure to choose a plant that you’re confident has enough nutrients to support both the mistletoe and its growth.

The time of year is important when propagating a mistletoe. Mistletoe plant is best propagated in early spring (between March and April). This is because this period coincidences with the time when the seed is at full ripeness. Before obtaining your mistletoe seeds, note the following points:

1.) On the higher tree branches of your host tree, select a branch of at least 10cm (or 4 inches) in girth.

2.) Look for suitable crooks in the branches where you can sow your seeds.

3.) If you do not find suitable crooks in the branches, make a shallow cut into the tree bark where you will propagate your seeds.

4.) Remove the seeds from their seed coats and insert them into the shallow cut in the bark.

5.) After stocking your bark/branch with sufficient seeds, cover the cut or flap with Hessian fabric and secure the bark with twine, to protect the seeds from birds.

6.) Germination is indicated by the appearance of a short green hypocotyl (a growing tip that bears the embryonic leaves). This hypocotyl bends to make contact with the host bark.

« If you have pets at home that are climbers, such as cats, you might want to keep them away from your mistletoe plant to prevent them from damaging the seeds. Click here to see some tips to prevent your pets from damaging your plants: https://twopeasinacondo.com/how-to/how-to-keep-cats-out-of-your-indoor-plants/

After appropriately propagating your mistletoe plant, there is little left to do to for its growth. Mistletoe is a parasitic plant, so a greater amount of care should be for the host plant on which it grows. Here are some points to note in the care of your mistletoe plant:

1. Germination happens very quickly after propagation. The hypocotyl is prone to attacks from many bird species and small invertebrates at this stage. It is also susceptible to dehydration until its roots connect with the host’s vascular system.

2. Although germination is rapid, mistletoes have a very slow growth rate. The hypocotyl should remain unchanged until February of the following year after propagation. Only then can a new plant begin to appear.

3. The branch of the host tree begins to swell in girth as the mistletoe develops. It can take five years before it begins to fruit. If you notice that your plant is either only male or only female, you can attach more seeds to the growing mistletoe plant (not the host tree) to induce germination.

4. Mistletoe plants are not prone to attacks from insects and/or diseases. Care should be prioritized for the host tree. Keep the tree regularly watered, apply fertilizers and provide extra tending to the host tree to keep it healthy.

« Mistletoe plants are not only harmful to other plants they can propagate on, but can be harmful to your house pets as well! If you’re looking for more pet- friendly plants to decorate your home, click here:

The mistletoe plant is an excellent choice for your festive decorations. It is rich in myth and tradition and requires very little care to propagate and grow. However, be sure to make sure it doesn’t proliferate beyond the capacity of the host tree, so it doesn’t permanently harm your host (and other) plants.