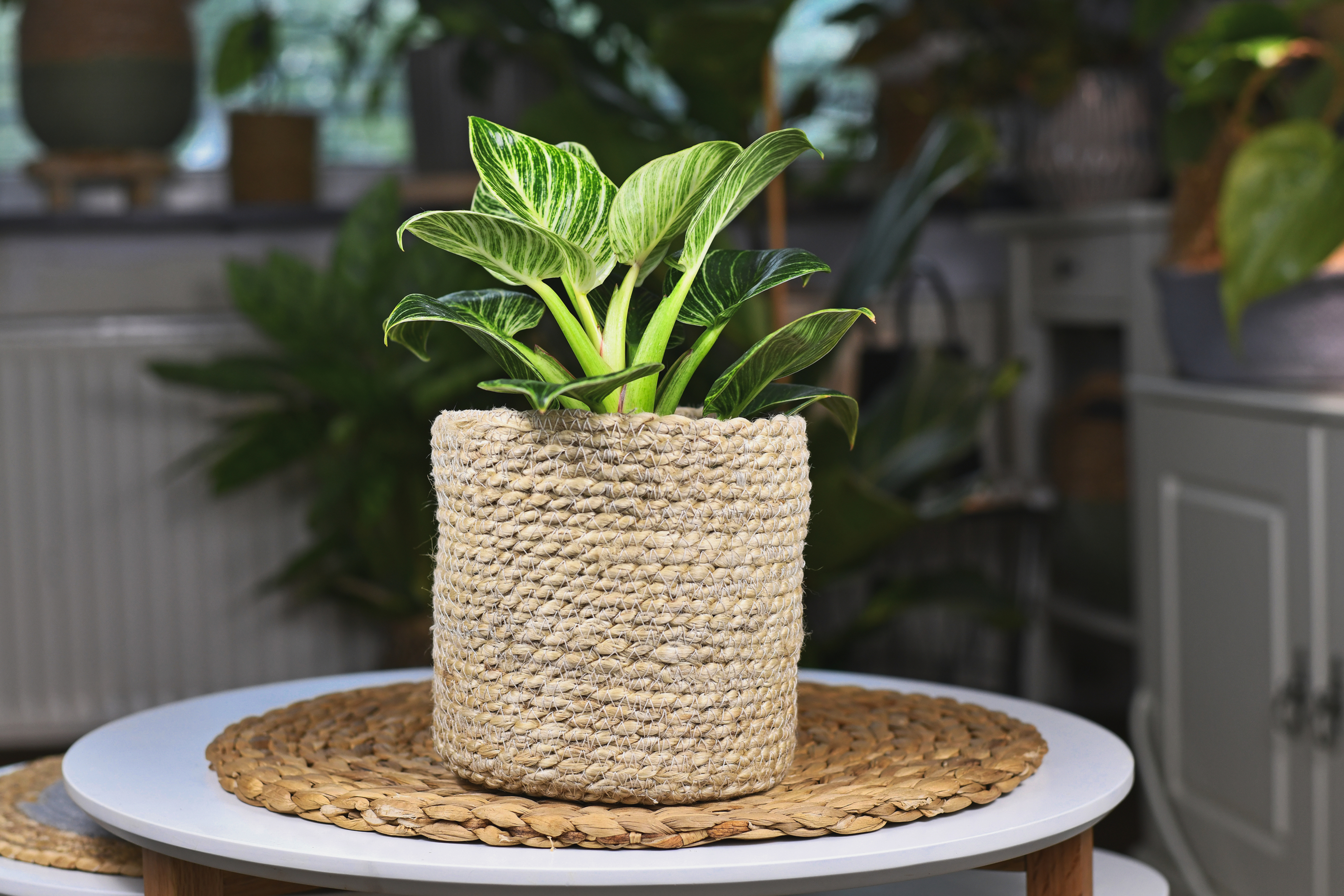 Philodendron Birkin is a fairly new cultivar on the market, and it’s taking the world by storm. Not only is it easy to grow indoors, this intriguing houseplant sports heart-shaped, glossy dark green leaves that look stunning in any home.

Philodendron Birkin is, hands down, one of our favorite indoor plants we’ve seen this year, and it’s just as easy to care for as common houseplants, such as succulents and Monstera.

In this guide, we’ll look at how to care for Philodendron Birkin, as well as the best ways to troubleshoot potential problems with your houseplant.

A Word Of Birkin Caution

There is a lot of conjecture around the Philodendron Birkin, mostly because of its newness to the market. We’ve done our best to compile reports and data from credible sources, but some data across the globe – whether in the United States, New Zealand, or China – conflicts. This guide will provide the most recent and relevant info on the Philodendron Birkin, but I wouldn’t bet the farm on these recommendations quite yet. As more information and testing becomes available, we will make updates. Until then, feel free to experiment with this beautiful cultivar from the comfort of your home.

This article provides a deep dive into the ins and outs of growing Philodendron Birkin plants. It will end up being very long (spoiler alert), and you may not have time for that. For your convenience, we’ll add some quick facts below. If you need more information, you can scroll down and see full details and recommendations.

Philodendrons were collected as early as 1644 by Georg Marcgraf, but Charles Plumier first classified the genus. The Philodendron has specific traits that make it a good houseplant. First and foremost, it’s relatively simple to find new characteristics of Philodendron and propagate entirely new cultivars. It’s easy to mix and match traits. This is why you might see new cultivars of philodendron popping up every few years, such as the Philodendron Birkin.

And because Philodendrons typically grow under the canopy of tropical places, they’re used to indirect light and moderate temperatures. This is similar to the climate in most homes, give or take some humidity.

Where Did The Philodendron Birkin Come From?

The Philodendron Birkin’s origin is still a little bit fuzzy. References to it have started appearing on message boards, journals, and blogs in late 2019 and early 2020. The Birkin seems to be a spontaneous chimeric mutation of the Rojo Congo. It was then separated from the original plant and propagated. It appears that the Birkins were introduced out of China and have slowly been making their way to New Zealand and the U.S.

Like other Philodendrons, the Philodendron Birkin contains high amounts of calcium oxalate crystals. This is considered toxic to cats, dogs, and even humans. In most cases, though, small amounts ingested generally result in mild symptoms. There are some reports of dogs and cats having extreme symptoms, though, such as severe ocular pain, conjunctival swelling, and severe inflammation. These symptoms are rare. If your pet has ingested a leaf or stem of the Philodendron Birkin, start by rinsing out the mouth and then calling your veterinarian.

Other Philodendron’s in the Araceae Family

There are hundreds of Philodendron currently classified, and they’re known for their characteristically large leaves and aerial roots. Beyond Philodendron Birkin, here’s the top list of Philodendrons to grow as houseplants:

You can check out many of these varieties on either Etsy or Amazon.

Like many Philodendrons, the Birkin is known for its glossy oval leaves with a slight creamy-white variegation. Each leaf has slightly different marks on its broad-shaped leaves. These white pinstripe lines only appear when the indoor plant has reached maturity, so you typically won’t see them on new leaves. It’s also known to sport a lime-green stem that contrasts nicely with the color of the leaves.

How Big Does A Philodendron Birkin Get?

The Philodendron Birkin can grow between one and half feet to just over three feet in height. If you need to manage your houseplant size, you can prune mature leaves, allowing new leaves to flourish.

You want to find a space around the house where the sun casts a soft shadow. If you decide to place your Philodendron Birkin in a windowsill, make sure it’s not getting too much light. Consider putting it in a west-facing window or an east-facing window. These typically have less intense sunlight than north or south-facing windows.

It’s essential to keep your Philodendron Birkin in a sweet spot between too much light and too much darkness. With direct sun, you could potentially scorch the leaves and even kill the plant. But with too little light, your Birkin’s leaves could sag and fall off.

If your home isn’t in the Goldilocks zone for light, you may need to supplement the natural rays with a grow light. You can see a few of our favorite options here. It’s important that you only light your Philodendron Birken for 12-13 hours a day. Too much daylight (and not enough darkness) can be harmful. Also, be sure that your grow light doesn’t overheat your houseplant, which needs to remain at temperatures of 60-75ºF.

Philodendron Birkins  grow best in soil or other growing mediums high in organic matter with good drainage. They will grow in sphagnum peat moss (or a peat most potting mix), as well as peat-perlite and peat vermiculite. The benefit of peat moss is that its texture allows water to drain nicely, protecting your Birkin from root rot or other water-related issues.

Like most Philodendrons, the Birkin prefers moist, but not soggy, soil. Make sure you never allow your potting mix or soil to dry out completely. According to the University of Connecticut, you’ll want to use ample water to keep your leaves growing uniformly. But much like light intensity, you need to have a happy balance with the Philodendron Birkin’s moisture level. While it needs lots of H20 to grow, too much – or poor drainage – can cause injury to the roots. Too much water can also cause leaves to fall off or yellowing of the leaves. So make sure you have moist soil, but don’t get carried away.

Philodendrons are perfect houseplants. They grow at a moderate temperature and require a reasonable amount of light. These houseplants also grow well in indoor containers. You’ll want them to have enough room to grow – generally a 10-20″ diameter, 10″ deep pot. You want room for the roots to be loose, which will result in healthier plants. We recommend repotting when the roots have reached the bottom of your pot. At this point, you should consider a larger size.

The glossy-green variegated leave’s signature to the Philodendron Birkin need fertilizer to stay healthy and grow. All types of fertilizer formulated for houseplants will work well for the Birkin, whether that’s a power, pellet, tablet, or liquid. Typically, though, the liquid fertilizer is suitable for balanced fertilization. Ensure the variety you choose includes the micro-nutrients that your Birkin needs, such as Calcium, magnesium, and Nitrogen.

Be sure only to apply fertilizer to moist soil. It’s generally better/safer to fertilize in a smaller amount than a single, more extensive feeding. You should typically water the plant with fertilizer once a month during the spring and summer and once every 1.5 to 2 months in autumn and winter.

Philodendron Birkins are native to tropical areas and usually struggle in dry climates. To thrive, they need moderate to high humidity levels. To create the perfect humid environment, you can do one of a few things. First, you could simply spray the plant’s foliage with a spray bottle. You could also get a humidifier that can create the humidity levels your Birkin needs. Some alternative methods include using pebble trays and creating a microclimate by placing several houseplants in a single area.

Philodendron Birkin is so beautiful that it’s easy to see why you’d want to make more (without going back to the store). There are a few different ways to propagate your Philodendron Birkin – we usually recommend methods that require stem cuttings.

The YouTube channel Onlyplants does a great job of walking you through the process step by step:

The main reasons for pruning your philodendron are if the plant is taking up too much space or the plant’s stems are looking too leggy. Typically, you’ll want to prune in either the spring or fall. Be sure to use pruning shears to create a clean cut. Also, throughout the year, you can safely give your Birkin a light trim, removing any yellowing leaves or areas infected by pests or disease.

Do Philodendron Birkin houseplants have vines?

No, unlike many other philodendron cultivars, the Philodendron Birkin does not have vines.

Can A Philodendron Birkin Revert?

There is some discussion and concern about the stability of the Philodendron Birkin. Since it’s such a new cultivar, there are a lot of unknowns. But there have been reports that the Birkin plants, produced with tissue culture, can revert to their parent plant – a Rojo Congo. There’s also the possibility that Philodendron Birkin can mutate into something else entirely. Even if the plant looks like the perfect Philodendron Birkin, there’s a possibility that the new leaves come in without the same white variegation we have come to expect with this houseplant.

This could be a sign that your Philodendron Birkin plant is receiving too much light. Move the plant into a space where the sun’s rays aren’t directly shining upon your plant.

While it seems counterintuitive, dry leaves could be a sign that your plant is receiving too much water. Make sure your potting mix allows for good drainage.

Brown spots on leaves can be a sign that the air is too dry. You may need to improve the humidity in the room. One easy way to do this is by misting the plant regularly with a spray bottle.

The Philodendron Birkin is one of our favorite houseplants of the year. And we’ve started to notice sellers popping up around the country, meaning that this houseplant is becoming more and more accessible. And the more growers, the more likely they’ll work out the kinks with this unique cultivar. We have high hopes for the Birkin, and we hope you give it a try.